London Has Fallen : Badass Banning is Back

It has been three years since terrorists took over The White House, in an attempted to access the CERBERUS Defense System, and disgraced Secret Service Agent Mike Banning (Butler) became a one-man army in order to save President Asher (Eckhart). Since then, President Asher has won re-election; Secret Service Agent Mike Banning is back in charge of the Presidents protection and is soon to become a father. Life seems to be going well for them both.

With the sudden death of the British Prime Minister, President Asher and Agent Banning fly to London for the Funeral, also attended by a majority of the Worlds Leaders (apart from the Russian President, but no surprises there). When all appears to be running smoothly, a series of attacks across London kill most of the Worlds Leaders, Banning jumps straight into action to keep the President safe. Together with the help of an MI-6 Agent who trusts no one, they are the only ones with any chance of saving London.

After the world wide success of Olympus has fallen, it was inevitable that we would be getting a sequel….and what a sequel it is. Total carnage descends upon the City of London in glorious Hollywood fashion. Gunfire, explosions and more cheesy action movie lines than you can shake a stick at. What Olympus has Fallen started with, London has Fallen has taken further and made it much bigger and better and is setting a new standard for your typical action movie.

Gerard Butler’s ass kicking, take no crap from anyone Mike Banning is back and in true action hero style. Taking on a city filled with terrorists single handedly, very much becoming this generations John McClane.

Aaron Eckhart reprises his role as the President of the United States Benjamin Asher, a very different President from the one we saw 3 years ago.

Morgan Freeman also returns to the mantle of Martin Trumbull but this time round has gone from being Speaker of the House to Vice President of the United States.

The script is distinctly weaker than it was for Olympus has Fallen, an unsurprisingly predictable story line, a couple of plot holes here and there and some very cliché dialogue written for the British characters. That said, there are plenty of amusing lines and even a few, shall we say less than subtle but still entertaining, jabs at some past and present World Leaders (looking at a particular former Italian Prime Minister). 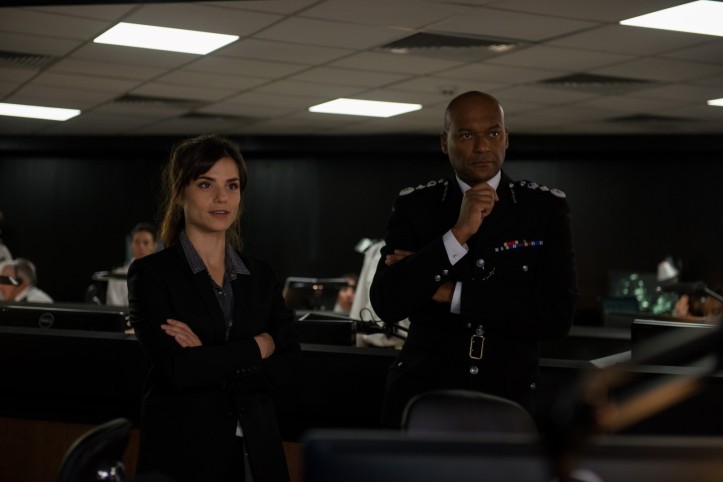 What the film lacks in the script, it more than makes up for with some much more epic action sequences than it’s predecessor. Being set on a City scale, as opposed to being focused solely in the location of one building, allows for everything to be that much bigger. There is even a pretty awesome car chase running from the steps of St Paul’s Cathedral all the way to Somerset House and a fantastic, bullet riddled single shot leading to the final showdown.

Olympus has Fallen was good, this one is better. From the first explosion, London has Fallen is a balls to the wall adrenalin fuelled action film. Though slow starting, it rapidly picks up pace and provides 100 minutes on non-stop action. Plenty of entertainment, colourful language and Gerard Butler’s bad-assery to go around.

London will Fall on 3rd March. Definitely catch it in the cinema while you can.