The Huntsman is back this time for the winter war, and he did melt my cold, cynical heart…just a little! Having not been a massive fan of the first film (each to their own I guess), I wasn’t quite sure what to expect from this prequel/sequel rolled into one. But no one can complain about watching Chris Hemsworth as the Huntsman. He is joined by a few familiar friends and foes, a whole army of new characters, and a rather chilling new adversary. 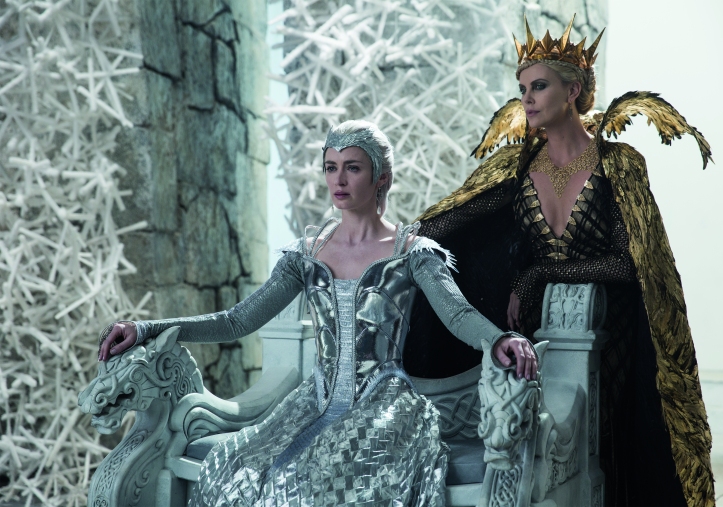 The narration through the first 20-30 minutes of the film did seem slightly excessive but it serve a purpose in setting the pre-Snow White Huntsman history out for us (we get go meet the Huntsman’s wife — she fights good!); the narrator’s deep voice also reminded us of what became of Charlize Theron’s golden “Ravena” the last time we saw her, and showed us the reason why our new set villain, Freya (superbly played by Emily blunt) became so obsessed with the cold.

Once I’d got my head around the reasonably complex story, I enjoyed what was essentially a classic tale about love conquering all (ahh), with a bit of a lesson on jealousy & revenge not being good for the soul thrown in.

A couple of comedic interludes from the band of well-Ioved “Brit com” dwarfs and a few cheekier moments from Hemsworth give the film a lighter lift. While I’m not entirely sure the story needed them, it did make us all laugh.

So apart from the incredibly annoying woman I sat next to, who insisted on texting through the entire film and then left in the middle of the the final climactic scene (seriously…why bother coming at all???) the experience was far more entertaining than I had anticipated! The Huntsman — Winter’s War is a novel and slightly twisted retelling of a familiar frosty fairytale. Cross this with a Grimm-esque dark edge and a pleasant dose of humour, it kept me hooked.

3 out of 5 stars! Oh, and maybe an extra half star for all the insanely spectacular dresses modelled by Blunt and Theron.