Every year, hundreds of thousands of geeks from across the world, make the pilgrimage to the hallowed ground of the San Diego Convention Center for Comic-Con. THE Comic-Con. Four days of panels, cosplay, autographs, selfies and buying things that you don’t need but dear god do you want them. 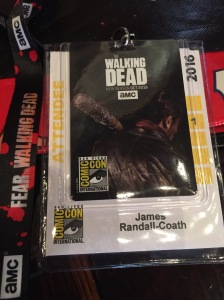 Many apply for badges and few are lucky to get them (for those that don’t know it’s like trying to get tickets from Glastonbury except harder). Most dream and some get to live it. This year however, this year the stars aligned and were in harmony with the universe. After almost a decade of trying, this year was my turn. I finally got my tickets to SDCC, my pilgrimage was about to begin.

For me, Phil and Rose, this was to be our first time at SDCC. We knew what to expect but being “newbies” to The Con, we didn’t know how best to go about things. Hopefully through our experience and a few simple rules, we can help future Comic-Con goers to experience the best Comic-Con possible.

It was just after SDCC 2015 that Phil, Rose and I registered online for 2016’s Con. Once we had done that we forgot all about it till the email came through telling us we were eligible for “Open Registration” (badge purchase) for this year. If you don’t have a registered account you cannot apply for tickets. Do it sooner rather than later so ensure you have a shot at getting tickets for next year. It’s still not guaranteed but at least you’ll get yourself closer.

Assuming you get through the EPIC waiting room, successfully purchase your badges and get yourself to San Diego for the convention, your next challenge is picking up your badge. If you live in the U.S you can have it posted to you, if you are from abroad then you have to collect it in person. The recommendation here is to do it sooner rather than later. The moment you can get in to “Attendee Registration” (badge collection) go. If it means getting up hideously early then do. Queues are very popular at SDCC and some can take ages. You don’t want to hold up the start of your experience by being in a queue you could have avoided.

Another massive part of SDCC is Cosplay (for those that don’t know what that is, it stands for Costume Roleplay). People dress up as all types of characters. Everything from Computer games, manga, anime, films and tv (even some that are particularly weird that you don’t get…like the bananas below). The really creative types put a new spin on that character or mix two different characters together in the same outfit. Some even swap the genders around. There are so many things you could do and it is a hell of a lot of fun at the same time. Young and Old everyone is doing it. It doesn’t even have to be some hugely elaborate thing. Even the simple costumes get people wanting to take photo’s of you. 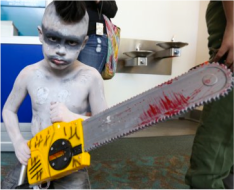 The Exhibition Hall is where all the seriously cool stuff is. Your first insti

nct is going to be to run around and buy everything you want there and then. DON’T (there is one and only one exception to this rule which we will come to later). Most things will still be there in a few days time so reign it in just for now. There is a lot to see and you will want to make sure that you see it all. Everything from Trading Cards to competitions to win a life-size R2D2 to full Props and Costumes from your favourite films and shows. This year was very much dominated by DC with WonderWoman and Suicide Squad being the big costumes on display and Arrow, Flash and Supergirl in attendance as well. Though not to be out done, Star Wars: Rogue One had a selection of costumes on display in their massive Jedi temple in the middle of the floor. They are definitely worth a look at….and maybe a selfie or two. 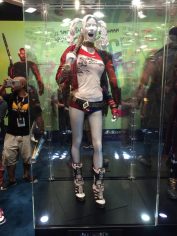 Yup, you could win yourself your very own life-size R2D2!!! 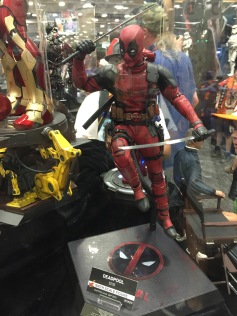 5) Don’t be late for Panels

The panels at SDCC are the big events of the whole four days. These are where announcements are made. People get a sneak peak at footage and even advanced viewing of trailers and other such delights. Some even give you a chance to pose a question to one of the panelists, so it’s a good idea to have a couple or questions ready just in case you get a chance. As with anything you will have to queue to get in. Some panels are less popular than others but you never know. Make sure you get there in good time to ensure you get in as they don’t clear the rooms after each panel. The closer you are to the front, the better your chances are of getting in should not many people leave. The panels are not to be missed.

Ballroom 20 is the secondary stage, as it were, for the convention. If there are any panels going on in there that you absolutely must see then you really need to get there early. It seats 4,800 people but, like I said, if not many leave, then you may not get in.

Now this is where it gets interesting. The main stage of the whole convention. The hallowed ground of Hall H. This my friends, this is where THE big announcements are made. Marvel, D.C, Warner Brothers. This is where you want to be for these panels.