A United Kingdom : A reflection on humanity

United Kingdom is a romantic film with fantastic scenes intricately woven together, stirring both emotion and frustration reflecting on the time it is set, and magnifying just how far (or little) humanity has come since…

Although A United Kingdom is set in Great Britain and about the tale of an African heir’s kingdom, it ultimately proves that sometimes nothing is greater than the unity between man and wife.

Based on a true story, director Amma Asante (Belle) retells the powerful and heroic triumph of an interracial marriage that rocked the British Empire while shaping an African country. The dramatic post-war love story of Seretse Khama (David Oyelowo) and Ruth Williams (Rosamund Pike) begins in London when the unlikely pair meet at a Missionary Society dance.

Khama was raised by his uncle and is heir to the throne of the Bamangwato people of Bechuanaland (now Botswana), a protectorate under British rule since the 1880s. The prince is living in London studying law, preparing himself for his duties as king before returning to his homeland where his uncle is set to appoint him a wife and queen for the nation.

Going against tradition and societal expectations Khama falls in love with Williams, an insurance clerk who has a typical middle-class upbringing living with her parents and sister. While courting for a year, the couple are subject to backlash and discrimination, having to fight for their love.

There’s a poignant scene where the pair walk down a London street at night when they’re confronted by white drunken men who harass them and beat Khama. Their aggressive feelings are summed up when one says “get your hands off what’s ours” and calls Williams a “slut”. The fight only stops once Williams is accidentally punched by one of the men.

It’s a scene that stems from the opening shot where Khama, as a black African man, is in a boxing ring fighting a white Englishmen. Symbolically the white man wins pulling some unfair moves and was told to “teach him a lesson”. Little did that man know he was fighting royalty, fittingly with the name Khama who would proceed to contribute to the fall of the British Empire.

In the face of fierce opposition from their families and the British and African governments, the pair from completely different worlds marry in 1948 with the plan to settle in Bechuanaland. Their union ignites an unexpected level of political unrest, linking the corridors of Westminster in dreary grey London to vast arid landscapes covered in red dirt in Southern Africa. 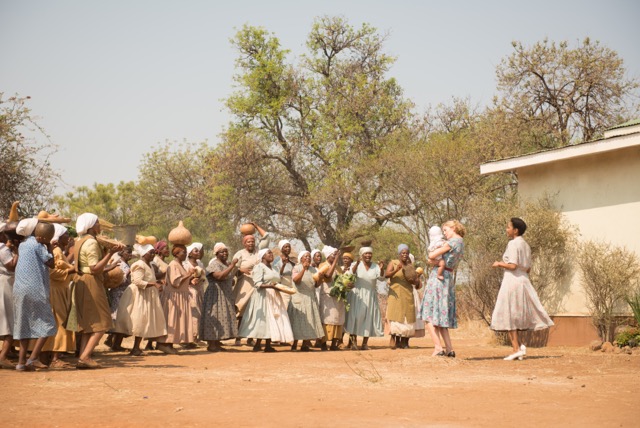 In the same year as their marriage, South Africa, which borders Bechuanaland to the south, had enforced racial segregation but began to enact the stricter and more systematic policy of apartheid. Living somewhat of a sheltered life, Williams had never heard of apartheid but makes every stance against it she can, whether in her homeland or in Africa.

At that time, Bechuanaland also had some levels of segregation. Its people were initially shocked and understandably apprehensive to have a white queen as their symbolic mother-figure, especially when their nation was a puppet to British rule. However, through the support of her husband and standing in solidarity with the African people, Williams wins over the nation.

Despite the film mainly focusing on the era-specific issue of racism, Williams is dealt her fair share of discrimination with sexism and nationalism also major themes. As it’s name suggests, it’s about uniting people and aligning collective progressive attitudes towards those themes in an effort to shape a nation’s political stance.

Khama’s political stance on the issue of racial segregation is an emotional one and is amplified through speeches to his own people. Throughout the film he speaks about “An Africa that’s not about black and white” and one that isn’t tied to the British puppeteer when he says “No man is free unless he’s master of himself.”

Ultimately Khama and Williams achieve unity in all senses of the word. They overcome obstacles as individuals, together and as a nation through their eventual democratic reign. A United Kingdom exemplifies the lives of two extraordinary people who helped shape a nation and unite its people’s attitudes towards some of the most pressing issues of that time.

It’s a romantic film with fantastic scenes intricately woven together to ensure attention is given to the political side of the story while clearly representing the era. It stirs emotion and frustration to reflect on such a time but also helps magnify just how far (or little) humanity has come since then.

Four out of five stars.

A United Kingdom screens in UK cinemas from November 25.