It seems lately that film executives have been looking back at the 80s and 90s, seeing the films and TV shows iconic to those decades and deciding to remake them for the modern day. Shows such as Starsky and Hutch, The Man from U.N.C.L.E and The Dukes of Hazzard.

Now it’s the turn of another Saturday night classic. In 1989 Beach Drama Baywatch launched onto our screens. With scantily clad men and women slow motion running along the waters edge, jet-skis and flimsy yet entertaining story lines, what more could you want. Lest we forget Pamela Anderson, Yasmin Bleeth and of course…The Hoff. Simply put, TV in the 90s was great. 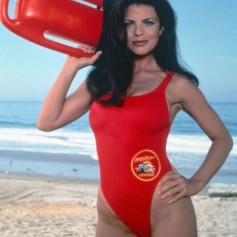 As with everything at the moment, Comedy seems to be the done thing when remaking these shows for the big screen and Baywatch is no exception. Being directed by Seth Gordon (Horrible Bosses / Identity Thief / The Goldbergs) who is surprised? From the look of things at the moment, this is going to be 21 Jump Street at the Beach.

With that in mind, who are our dedicated California lifeguards? Dwayne “The Rock” Johnson takes up the mantle of Mitch Buchanan, the character made famous by German Music legend David Hasselhoff, the veteran lifeguard and leader of the Baywatch team. Kelly Rohrbach replaces Pamela Anderson as C.J Parker, certainly a big swimsuit to fill, Nicole Eggert’s Summer Quinn is now Alexandra Daddario. Ilfenesh Hadera takes the reigns of Stephanie Holden from Alexandra Paul and Zac Efron plays the young blood Matt Brody, brought in to re-envigorate the Baywatch image, formerly portrayed by David Charvet. 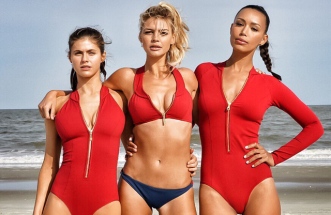 As an immediate impression, the casting is not so different from how it was cast back in ‘89. Buff, busty and bare skinned.

So with a cast like that, what does the plot look like for this modernised classic? Well it looks to be something like this: The Baywatch team in California are running out of money and Mitch Buchanan (Johnson) is told that the image needs to be restored. Enter Matt Brody (Efron), the young party boy brought in as a P.R opportunity for the team. After a dead body washes up on the beach and no one seems to care, it’s up to the Baywatch team to solve the crime. 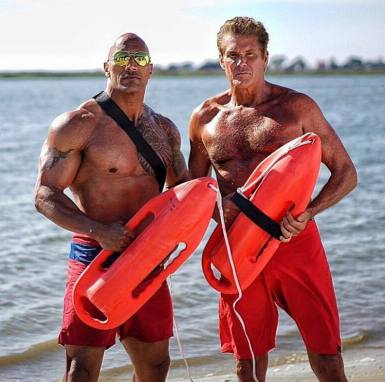 It is probably a safe bet that plenty of party scenes will ensue, suitably filled with tight tanned bodies permanently attached to their swimwear. Slow motion running is pretty much a given, as is people diving dramatically off high vantages into the blue Californian waters. Expect cameo appearances from David Hasselhoff and Pamela Anderson along with some, probably not so subtle, references to the shows origin. Let’s not forget the classic theme tune which is sure to feature.

Baywatch will be making a splash in Cinemas 19th May 2017. Will you be ready?