The First Purge is a politically charged B-movie. Following the success of Get Out; Blumhouse productions offers another thriller highlighting very real socio-political issues.

The prequel and fourth film of the horror franchise goes back to the origin of The Purge, an annual event where for 12 hours all crime, including murder, is made legal.

Unlike the previous films that are set in a dystopian future,  The First Purge takes place in 2018. Our current real world is referenced throughout the film. It opens with a montage of current news events and protests relating to unemployment, migration and poverty.  ‘I would have voted for Obama a third term’ says one of the main characters in the opening scenes.

The first ever Purge started as a controlled social experiment led by a new political party in power, The New Founding Founders of America (NFFA), and a social behaviourist Dr.Wade (Oscar winner Marisa Tomei)  who believe they can lower crime rates by allowing people release their anger and violence for a short period of time.

They set up the experiment in Staten Island. Citizens who do not wish to participate may leave for the night but those who stay are offered a financial reward with bonuses for participating in what would usually be considered a crime. Inevitably the scheme attracts the poorer communities. 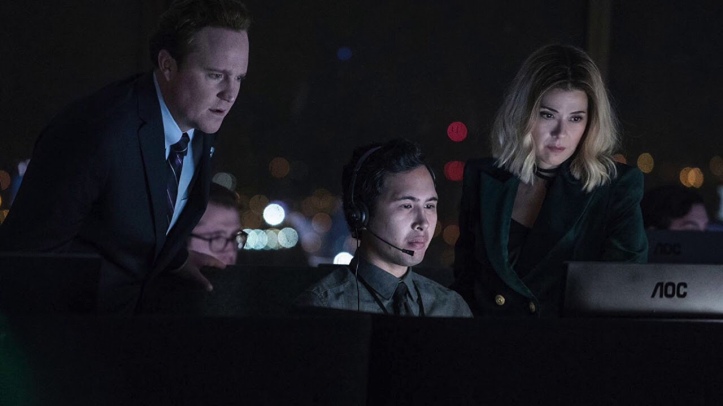 It is pleasing to see another film comprised mainly of black and Latino actors. We follow the main characters Dimitri (Y’Lan Noel), a top dog drug dealer, his ex Nya (Lex Scott Davis) an activist with integrity, and her little brother Isaiah (Joivan Wade) who decides to participate in the experiment, unknown to his sister, as he just wants a better life for them both.

The experiment kicks off as the white office workers watch the events unfold from their tower. But after a few hours the results are not what the organisers had hoped for: most people are regrouping in community spaces, looking out for each other and partying in the streets apart from Skeletor (Rotimi Paul), a Freddy Krueger type blood thirsty junkie with pretty bad SFX facial scars.

Against Dr.Wade’s will, the NFFA bring in the big guns and send in ex-military and mercenaries disguised as participants to carry out the social cleansing the governing elite had hoped citizens would excercise on their behalf. “I can’t believe what I have done’ she says dumbfounded, a statement that unwillingly commands laughter from the audience. The storyline remains corny and predictable but this is something we can forgive a B-movie that has decent fight scenes.

In the era of Trump, this dystopian future seems all too close. In one scene Nya defends herself against a ‘Pussy grabbing motherfucker’, a clear allusion to the tape Trump was caught while bragging about grabbing ‘women by the pussy’.

The First Purge is a cheap thrill film about the State cracking down on minorities who have only one choice: ‘to fight back’. Some may argue it’s attempt to tackle complex socio-political themes is lost in the corniness of the storyboard but take it for what it is: a  B-Movie horror film attempting to bring a bit more depth to the genre, and fair play to that.

IN CINEMAS NOW (FROM 4th JULY)