The Hunt, a film that was given the best form of publicity a mid tier movie could ever ask for… being slated by most media outlets as to controversial, to decisive, to political, to violent, even causing the president of the united states himself to throw his toys out of the pram and complain, so the film was removed from all future releases and shelved for life. Or so they had us believe, as for march 2020, after months of cleverly just keeping quiet, biding its time, waiting for that social justice twitter dust to settle down, The Hunt out of nowhere was re released and unleashed onto the big screen for everyone to go and see what all that drama was about. I believe it paid off, the cinema was jam packed, and mostly everyone I spoke with was excited as without the storm, would this film have really been given such a platform of interest, would people have even cared about it, would this have just gone under the radar and been one of the films you watch on Netflix one evening, who knows…

For me, I thought the movie was very entertaining, It had some great performances and the humour was on just on point. I don’t really get triggered or outraged with the whole political stuff, so when the film pokes fun with certain characters and references, I take it as it is, a joke, especially as the Hunt plays it off well by targeting all views/parties. So I enjoyed the comedic stance the film set out from start to finish. Also what I might do from now on is stop re watching the trailers just before hand as on this occasion I didn’t get a chance to re see the trailer since last year. So sitting down and watching the movie, I felt blind, and had no clue what to really expect. It really did feel nice not seeing key scenes that I’d normally already remember from the trailer, so that was a hidden plus for future reference.

The Hunt, has quite a blend of characters, famous actors that you’ll recognise but then have to question from where you remember them from, so in a thriller like this, that actually played to its strength because I found myself non stop thinking.. oh she or he is famous so they can’t die right now, and then bang… The film does a perfect way in tricking you into wandering who actually is the lead character for quite a while. 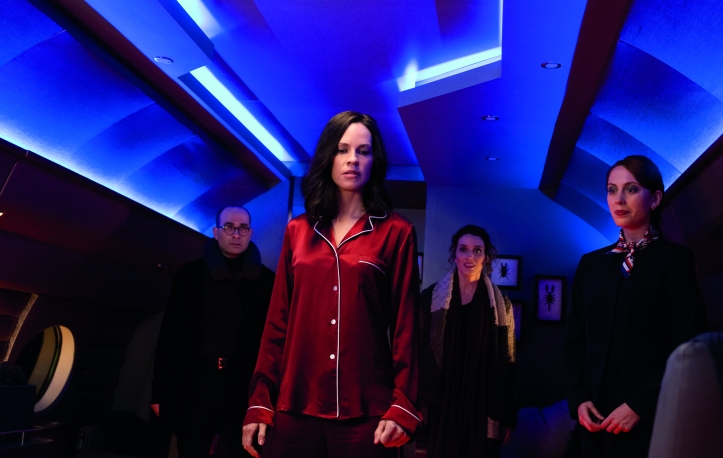 As a fan of the Netflix show GLOW, I was so happy for actress Betty Gilpin, to finally get a movie role that really showed off her great character. She literally steals the movie and is one of the highlights of The Hunt. Alongside her is the amazing Hilary Swank, who although isn’t in the movie as much, she still dominates the screen time she’s given and plays her role so well as the main villain. The film is based around 12 strangers, who have been kidnapped, drugged and woke up on a random plot of land. They have to fight to survive being taken out one by one by an elite power hunting them down for sport. The movie is a satire, it doesn’t take itself too seriously. It is fun, with nice tongue in cheek moments, amazing action scenes, and great characters. That all be it you don’t really get time to be invested in them but for that very fact, I didn’t mind that, because it’s a hunt and people are supposed to die randomly and quick. On this occasion, I’m not going to go all in and say anything really on character development because a movie to me is the feeling it givens you after it ends. If I have hundreds of question and leave upset or not fulfilled then the movie has failed me. The Hunt, for what it is, it’s a simple, non global threat to sjw’s and political trolls, its just a movie that throws humour at all parties, no matter what you believe in. I’m glad to say the cinema was laughing as intended. My first thought when leaving was I can’t wait to show this to my dad and brother. So to me the film gets a big thumbs up.

The Hunt is OUT NOW