I love asking people the question “If you could go to any concert and see any artist, dead or alive, who would you pick to see?”

People usually jump to the legends that have passed: Michael Jackson, Amy Winehouse, Prince… but so often I hear the answer the Queen of Pop herself, Whitney Houston. After her tragic death, so many mourned her loss and were bereft that their chance to see their idol perform seemed to be gone forever… but perhaps this isn’t quite true!

Belinda Davids is Whitney risen again! Hallelujah! There are not many people who can even attempt to sing a Houston song without coming across as an X-Factor outtake, yet Belinda not only masters each song but manages to sound and look like an exact replica of the woman herself… what more could you want from a tribute act??? 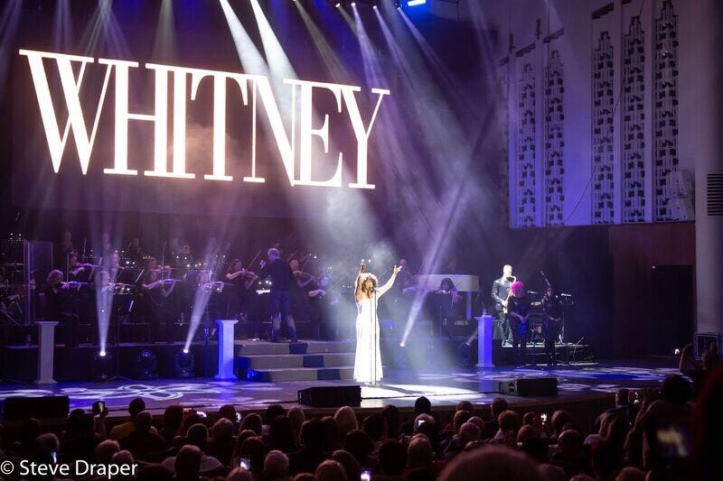 But she doesn’t stop there! She even addressed the crowd between songs exactly as Whitney used to, with that soulful, loving croon. Her energy and vibrancy draws you in and several times I forgot that it wasn’t actually the real deal. Belinda sashayed through the audience at one point, tailed by her bodyguard (Move over Costner, there’s a new Frank in town!) and the crowd went wild! People were clambering over each other just to get closer to her.

Her talent is elevated by the fantastic replica costumes, some very flexible dancers and an incredible backing band. Every time the Orchestra started up for the next number, I was covered in goosebumps and by the end of the evening I was moved to tears. But the highlight of the night was her performance of I Have Nothing whilst the recording of the 1993 Billboard Awards performance by Houston played in the background. The way she mirrored her performance exactly was just phenomenal!

Belinda not only embodies her idol, but she also pays homage in the most breath-taking way. By the end of the evening, there was not a dry eye in the house! It’s safe to say it was…So Emotional…. (Sorry, I couldn’t resist!)

The Ultimate Diva may have left us too soon, but her spirit and legacy clearly live on in another.

You can catch The Whitney Houston Show the rest of this week in Cardiff, Southend-On-Sea, Manchester and Belfast before she embarks on her USA tour. Don’t miss out!