There is an advantage to being a child that we had not anticipated until today. When an enthusiastic young boy asks to have a look at the Bugatti, of course he is permitted to park his bottom on the driver’s seat, “Hold the wheel like you’re driving it son, and let’s get a photo!” It’s cute isn’t it? The small boy with big dreams.

Us adults don’t have the same golden ticket that an enthusiastic child carries naturally. But we can ogle and stare and utilise our selfie sticks to their highest potential instead, and that was what everyone seemed to be doing at the start of the London leg of the Gumball 3000 race on this fine bank holiday Monday.

The Gumball 3000 is an international, British-birthed, celebrity motor rally that covers a grand 3,000 mile journey on public roads and costs a reported £35,000 per car for two persons to enter. The route for the 2016 race is Dublin to Bucharest, a fairly sedate choice compared to 2014’s “Miami to Ibiza” (won by deadmau5 and co-driver Tony Belleci in their “Purrari”), and 2015’s “Stockholm to Las Vegas” route which included Lewis Hamilton making a guest appearance for the Las Vegas arrival in the famed Koenigsegg Agera HH (Hyper car of the year, 2010 as named by Top Gear magazine).

The Gumball 3000 is in its 18th year, and pretty much as it sounds, it’s a black American express, dark sunglasses, slick millionaire hair, and sponsors with bottomless wallets culture (with the likes of MTV, YouTube, Christie’s and global giant Shell on board). While the Gumball group is valued at over $300m by Forbes, it has since 2013 turned over a more focused charitable leaf for the rally with the creation of the Gumball 3000 Foundation, created to benefit disadvantaged youth through educational, recreational and environmental-focused projects, and has seen some pretty sweet involvement with charities like When You Wish Upon A Star, and The Tony Hawk Foundation.

But at the end of the day, the truth is we are all there with our selfie devices and social media hashtag addictions for one reason—the cars! The beautiful and exotic, uber-customised hyper cars that make envy our number one sin. And this year’s rally didn’t disappoint, with the chunk of central London’s Regent Street between Oxford Circus and Piccadilly completely shut down to accommodate the arrival of the rally’s VIPs (Or would that be VICs?). There were some truly unique prototypes on show with the “History of the Motorcar” presentation involving arcane engine structures, ridiculous dedication to reducing wind-resistance, and oddly warped glass bodies. There was also a stunning range of classics in fabulously restored condition, everything from Lagonda to Bentley, but of course the real stars came with the rally arrivals. We loved the Oakley sponsored Bugatti Veyron (because EVERYONE loves a Bugatti, even when it’s covered yellow and black like a bumble bee with sponsorship logos), and the usual suspects from Ferrari, Lamborghini, Zonda, Audi, Lotus, Astin Martin, Porsche, Nissan, Rolls Royce, to name just a few—it was something of a sensory overload. And what was that Batmobile? Holy cow….! (Check out @teamgalag if you missed it!)

Wait, did I breeze over Lamborghini so quickly? Sorry, let me reset that tone. The rampaging Italian bull has been a love affair of mine since I was fourteen, on a whole ‘nother level of geek. Forgiving the arrival of the unfortunate Gallardo with the German acquisition (which we now tentatively forgive), Lamborghini remains the sexiest word in super car lingo. Argue with me all you like, but seeing that pearl white matte Aventador got me turned on like—!

Okay, but back to the point, Regent Street was the place to be in London today, for the tourist, the local, and the enthusiastic child in all of us. Especially if you are a child who still firmly believes that when she grows up she’ll own a sleek 99’ Lamborghini Diablo VT and will be capable of funding herself to race in the Gumball 3000 with the sole goal of [not] losing points off her license. 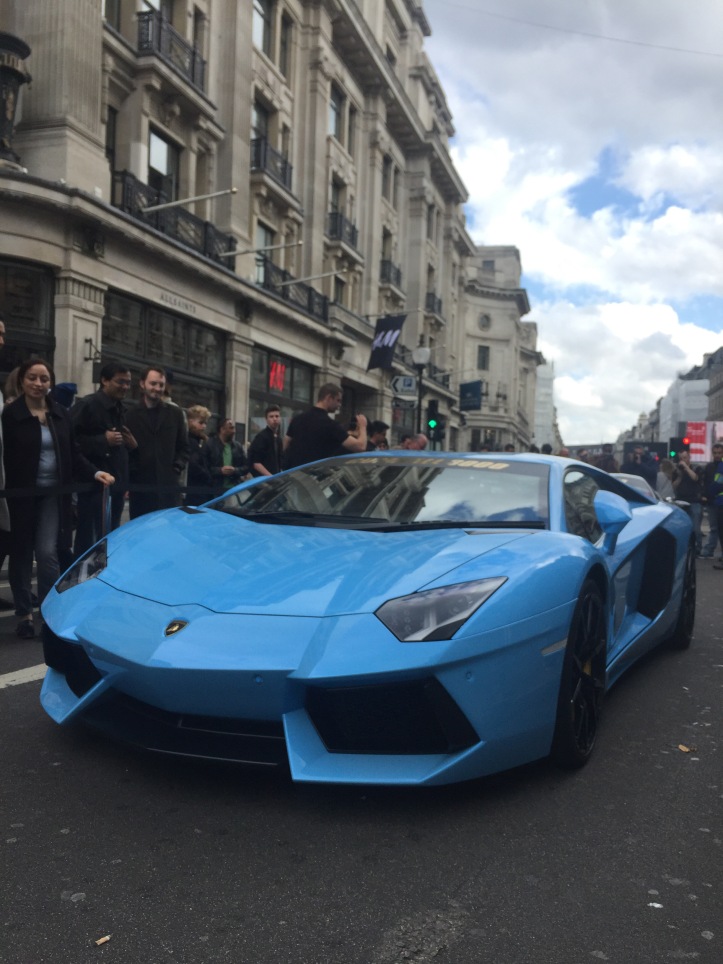 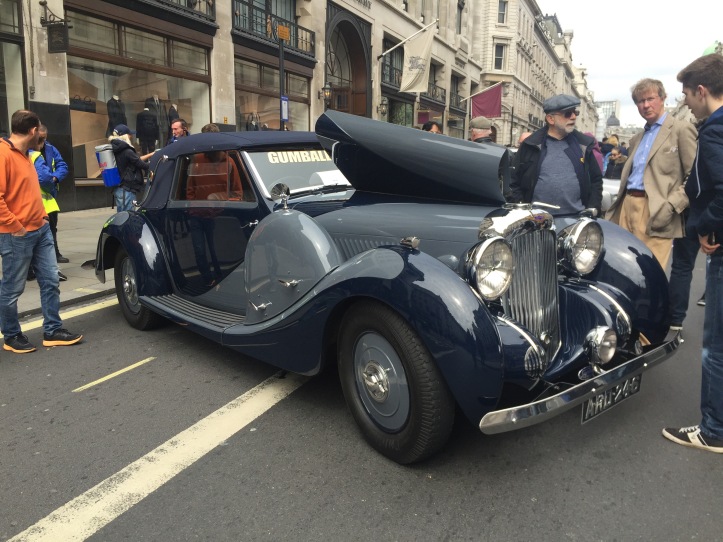